Wyatt is best loved as a DJ at Planet Rock radio - the UK's No.1 commercial digital radio station which boasts Alice Cooper and Joe Elliot amongst it's broadcasting stable. But to pigeon-hole Wyatt as a DJ would be sheer folly. He is a talented actor, recording and touring musician, ultra-cyclist and an incredibly versatile broadcaster. Here is how it all began in his own words ...

Born in London some time ago to musician parents, a musical career of some kind was an inevitable conclusion, but not a straightforward one.

After studying acting at school and college I took up music instead of acting, learning the drums from 1990 and joining my first band the same summer (I was a fast learner).

By 1992 I was in my first “real” band playing gigs throughout Hollywood and LA trying to live the dream all whilst still being a teenager (under the age of 18!). When the Boulevard Of Broken Dreams put permanent road works up I came back to the UK and started studying music whilst joining various bands. 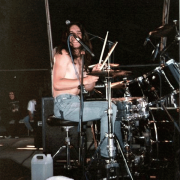 By 1995 I was a member of Screaming Lord Sutch’s live band and had joined the Essex trio Baby Paint which led to a record deal and an album “LifeJacket” (which you can buy here). By the late 90’s it was clear I wasn’t going to make a long standing career in music, and the acting game wasn’t paying dividends either, then one night in the bath it just came to me “Why not give this radio lark a try?!”

Cue a radio course, and a lot of rejections, a lot of effort and finally in 2000 I turned professional at Radio Aire in Leeds spending several years in the North before heading South doing the first of four breakfast shows at Mix96 in 2002. Around the same time I started teaching myself how to DJ in just about every dive Leeds and West Yorkshire had to offer. I got to a decent level and started playing various bars and clubs up and down the land, including Nottingham Rock City and Gatecrasher to name a couple.

Fast forward ten years from there, and after taking in over 25 other radio stations including Viking FM, EssexFM, SGR, Heart &amp; RealXS I got a phone call out of the blue from my dream station in the summer of 2012 ... Planet Rock. “How would you like to do some cover for us?”, was the question.

My first show was on August 11th and I officially started on my birthday, October 1st, of the same year. I’m still here ...

I've also got back into the acting with a stint as Mr Edward Hyde in a great production of 'Jekyll and Hyde' at The Lion & Unicorn theatre in London in 2014.

As for the future. Who knows? The future is after all, just a memory we haven’t had yet ...

View more pictures of Wyatt in various guises - as a Planet Rock DJ, an actor and even in lycra. Plus photos from his youth ...

Are you seeking a charismatic, knowledgeable and professional rocker for a DJ set, gig compere or voice-over work?