To bring R2R2 to life and the Planet Rock Allstars single at such short notice at exactly the same time has, in all honesty, been near impossible. It would have been tough to do with over a year to plan and get things in place let alone barely three months! But here we are at the near point of the two big reveals (for want of a better phrase!).

I’ve been asked a lot lately (as I was in 2016) how is the training going, what am I doing etc. but this year there have been a few wonderings why there hasn’t been many training videos or training updates. To understand why I need to go back to last winter …

Early this year I noticed I seem to be putting on weight (visually). I put it down to the time of year and didn’t think too much of it, except I kept getting bigger and bigger. By Springtime, I looked about 6 or 7 months pregnant, but yet my weight was roughly what it had been for some time (16.7 stone approx.). I couldn’t understand what was wrong or why I felt so tired and heavy. Of course the persistent comments about my weight didn’t help (“Someone hasn’t been on the bike lately” and ”Someone needs to get cycling again” etc. etc.). The online brigade had picked up on my appearance and were running with it.

I was eventually diagnosed with a SIBO. That is a small intestine bacterial overload, which had built up over time. In short, gases were bloating and inflating me to levels that were physically uncomfortable and painful and left me feeling so tired. I had a diagnosis and treatment and added some lifestyle changes to help assist with the recovery and it was around this time I knew I would do the R2R2 knowing that I’d be better in no time.

Except the two-week course of strong antibiotics didn’t work. Certainly not nearly enough. What made it worse was during the treatment the antibiotics made me even more ill and tired. I was in no state to train.

I was then given three different sets of tablets to take for two weeks at a time with two weeks off in between (so a 12 week course). It was Autumn and the R2R2 was public and I needed to get into shape. I started training and did what I could but the tablets made me feel really rough (again!). The second set were the worst antibiotics I’ve ever had. 1200 mg a day of tablets that just dehydrated me daily and me feel so rough. I trained where I could but it has been nowhere near enough for what I need to do for R2R2. I finished the second set of tablets (the worst ones!) early in November and I’ve postponed starting the final course until I finish the event as I’ve no idea what they will do to me – but I know it won’t be good.

In short while I’m not in bad shape, I am far from my best, but I know what I signed up for and I know what I need to do. I’ve worked hard to get my weight and body under control despite what it has been going through for most of 2019. I’m hardly ripped but as you can see from the before and after photos from the summer (at my most bloated) to now, it has been a journey and a bit of a transformation for me. 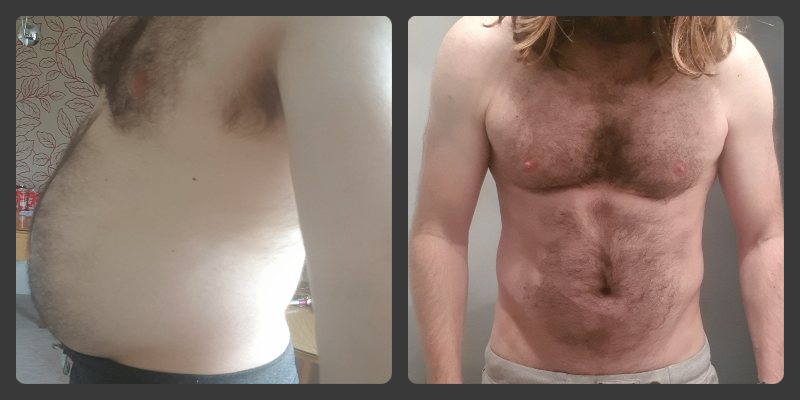 I’m now over a stone lighter and look a little more in cycle event shape.

The roads are long, and the weather will be tough but I’m ready and I will get this done …

Thanks for your continued support.