So it happened. The Ride To Rockstock … full of adventure, stories, highs and lows.

The original plan was for the ride to be 185 miles with a bit of rain expected at some point. What occurred was something very different …

I was hoping to set off quietly and just get on with it, but alas no, there was a big send off and a big crowd cheering me off from the Central London, Planet Rock studios at exactly 3,30pm on Thursday December 3rd.

I was hoping my start wasn’t an omen off things to come! My gps holder wasn’t fitted properly and I only had 1 bottle of water instead of 2, so I could soon be lost … and thirsty!

I remembered my way out of central London through memory knowing I’d meet the support car about 15 miles out to get supplies and the GPS properly fitted.

As dusk gave way to night the weather was pretty good, mild and still, and I was surprised as various bystanders tracked my progress live online and then were coming out to say hello and get pictures, give well wishes and so on. There were also various cyclists joining for stretches which was welcome and enjoyable. I figured this would end as we got into more antisocial hours but alas no, the support just kept coming.

As 7pm came and I entered the Reading suburbs a light rain began. As I left Reading and got into the Berkshire countryside that rain became violently heavy and the wind whipped up … and didn’t stop … for hours! Within minutes I was utterly drenched and soon I realised I wouldn’t get much wetter if I stepped fully clothed into a home power shower!

Spirits were good and there was never any question of anything other than just ploughing on. Still people joined the ride to cycle with me and people also came out to wave, say hello in just the worst of weather and in the most rural of places. It was unbelievable. At one point it seemed people were just appearing out of bushes in rural dark villages!

As it got to nearer to midnight, Swindon was entered and the decision was made to go off route and find a 24 hour McDonalds to get something warm to eat and at least change my gloves and socks. Unfortunately the “off route” part involved a few extra miles round trip which added to the end total. By now the rain had stopped and was replaced by a very cold sharp wind!

After a food stop it was time for me to shiver off into the cold night taking in some stunning Wiltshire villages and more people coming out in all hours to all places! At 2am in the village of Malmesbury one listener came out to marshal me away from a farm track to make sure I stayed on the safe road. Wonderful thoughtfulness. 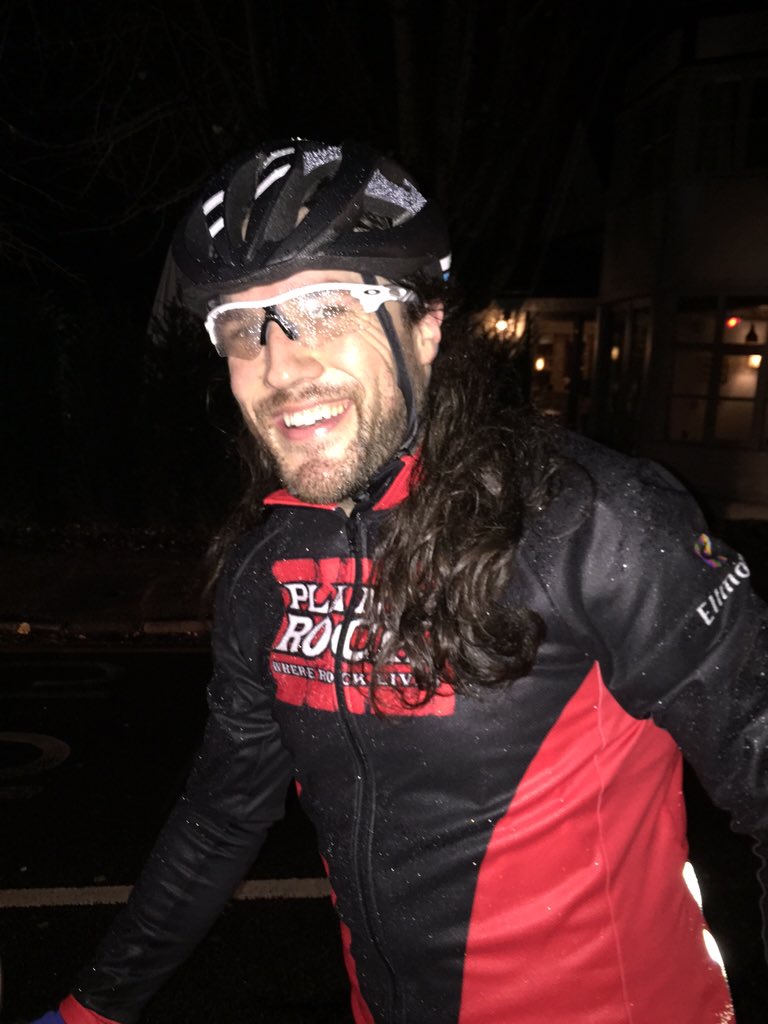 Unfortunately shortly afterwards I rode straight into a village ford! A huge stretch of water I had zero chance of riding through. There was no way at 3am I was going to go back and find another route, so as the support car did just that I picked up the bike and shimmied along around the water until it was safe to get back on and ride …

At 4am a motorcyclist found me having been roaming up and down looking for me to give me a hug and a donation for the charity. Just amazing. Even in my tired state I appreciated it so much.

To this point I was losing time. I had hoped to be at Aust for the Severn Crossing around 3am and even though this wasn’t a race I still had a timetable in my head that I wanted to stick to, that and the fact I had advertised a potential flash mob party in the middle of nowhere for 3am.

As 4am passed I figured any chance of anyone turning up for any kind of gathering was near zero, but as it got nearer 4.30am and I approached the layby in pitch black darkness I saw a camper van and two vehicles all there, someone standing on top of the van, AC/DC playing out of the stereo … I had the flash mob party I was after!!

Cup of tea, several photos and conversations later it was time to roll back out. What a random, surreal moment that was!!

Everyone said that the Severn crossing was going to be a problem wind wise. On the contrary, after everything I’d gone through weather wise it was a gentle breeze and nothing to worry about!

The real problem was when I hit Newport. I hit the wall big time. I could hardly stay awake. Had to stop for fuel and caffeine and hope that daylight would bring me round … it did!

Navigating Cardiff city centre in rush hour wasn’t much fun either … I was losing the support car in said city centre while it was charging my GPS and phone, so I was lost, no car and no way of communicating! Fortunately the car was roaming up and down looking for me so not too much time was lost, but a bit of extra riding to the final total.

Just to really put an exclamation point on the difficulty of the ride, the wind whipped back up right at the time all the drags and hills began on the roads from Cardiff to Bridgend.

My resolve was strong now. I had been going too long to this point and there was just a few miles left. More and more people were out to see me pass by, some riding some just passing in vehicles and on foot. It was turning into some occasion.

Finally at midday, 20 hours and 200 miles after setting off, I entered the entrance to Trecco Bay. A few people dotted about shouting and cheering. “That’s nice” I thought thinking I’d turn the corner and stop and that would be that. I turned the corner and there was a 100 strong crowd with banners, flags, cowbells and a lot of noise! 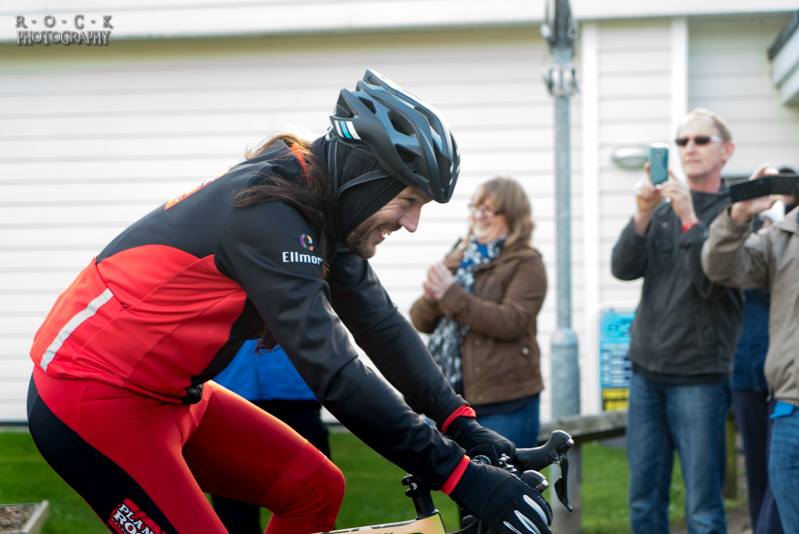 It was some welcome. I was almost embarrassed at the big fuss being made but it was very welcome! The next few minutes were a bit of a blur! I remember lots of pictures being taken, giving a radio interview and an impromptu speech to the crowd.

It was an amazing occasion, it really was and the donations just rocketed beyond belief.When I set off we were at £27,000 and when I finished we were at over £33,000. Less than two weeks later that converted to over £41,000!! An unbelieveable amount raised in just 6 weeks!!!!

I can’t express how proud I felt being able to do that for hopefully many people raising awareness and giving people a little light in their dark times and maybe giving some hope that it’s ok to stand up and say “I’m struggling”. 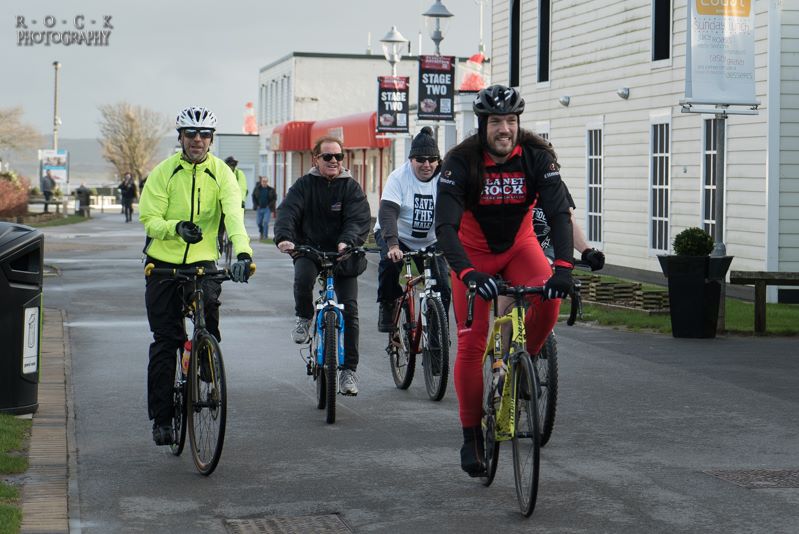 I know as the days and weeks pass I will start to feel very proud of the ride itself (and not just the awareness and funds raised).

As for the rest of Rockstock, everyone thought I’d be barely able to walk or stand and that I’d spend nearly all weekend in bed so I put paid to that belief by having a couple of hours sleep after the ride then stayed up till 2am on the Friday, 3am the Saturday and 4am on the Sunday! Well there was fun to be had and I am the bike boy of rock n roll!

It will be big. REALLY big!!